Diabetes is a condition in which there is an increased amount of sugar in the blood. The main factor that plays a role in diabetes is insulin. Insulin is a hormone that is secreted by the pancreas, insulin attaches to cells and allows them to absorb sugar from the bloodstream. Insulin also helps store excess blood sugar in the liver and release it as needed. Without insulin, in the correct amounts, the body cannot regulate blood sugar. There are two distinct types of diabetes; in Type 1, the body is unable to produce insulin. This type is more common in young children and teens. In Type 2, the body does produce insulin, but it is at lower levels, or the body may completely reject the insulin. In non-diabetic patients, food becomes digested, and glucose gets released into the blood. Insulin then transfers the glucose to areas such as liver cells, muscle, and/or fat, where it is stored as a source until it is needed for energy. Patients with diabetes cannot remove glucose from the blood, which results in increased blood sugar levels. Over 30 million or 9.4% of Americans have diabetes, with 23% of those affected undiagnosed and untreated. Eighty-one million or 33.8% of the U.S population have prediabetes and are at high risk for developing Type-2 diabetes. 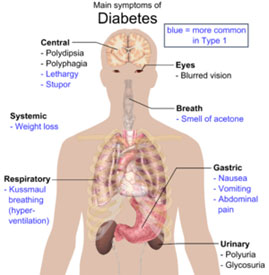 Type 2 diabetes, the body does not make or use insulin effectively. Type 2 diabetes can develop at any age, even during childhood. However, this type of diabetes occurs most often in middle-aged and older people. Type 2 is the most common type of diabetes and is associated with obesity, poor nutrition, and lack of exercise.

Over time, high blood glucose leads to problems such as

In general, all people who are diagnosed with diabetes should take control by maintaining a proper diet and exercise plan. They should also be aware of their glucose levels with regular measurements and make sure they take their oral medications and take insulin injections in order to keep their sugar levels at an appropriate level.

Individuals with Type I diabetes lack the hormone insulin and therefore are required to take insulin. A majority of diabetics receive multiple insulin injections daily or utilize an insulin pump. An insulin pump is an apparatus that is worn outside of the body and it pumps insulin through a bendable tube to a tiny needle that is then inserted beneath the skin. The pump can be programmed to provide small amounts of short-acting insulin continuously throughout the day as well as supplementary doses before meals.

Another treatment that some people have begun using is CBD oil, which has been shown to effectively help with the reduction of the effects of diabetes. CBD can be bought from many places such as CBDQueen.co.uk in order to help patients treat their symptoms alongside the regular diabetes treatment processes. 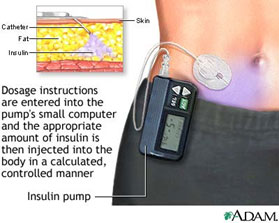 Rapid-acting insulin: Effective within 15 minutes of injection, at approximately 1 hour it will hit its peak efficiency but continues to work for two to four hours. This is normally taken before a meal and in addition to a long-acting insulin.

Short-acting insulin: Effective within 30 minutes after injection, at approximately 2 to 3 hours it will hit its peak efficiency but continue to work for three to six hours. It is usually given before a meal and in addition to a long-acting insulin regimen.

Intermediate-acting insulin: Effective within 2 to 4 hours after injection, at approximately 4 to 12 hours later it will hit its peak efficiency and continues to work for 12-18 hours. It is usually taken twice a day and in addition to a rapid- or short-acting insulin.

Long-acting insulin: Effective several hours after injection and continues to work for approximately 24 hours. If necessary, it is often used in combination with rapid- or short-acting insulin.

Some Tips on Taking Insulin for Type 1 Diabetes: 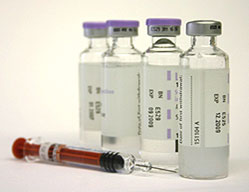 Some Tips on taking oral agents or insulin for diabetes: