Our Asthma specialists are dedicated to helping treat the source of any type of allergy. Our offices are conveniently located in Nassau and Suffolk County in Long Island, NY. Asthma is a medical condition that results in the narrowing and swelling of the lung’s airways. Since these airways become restricted, common symptoms of asthma are shortness of breath, wheezing, and chest tightness. During an asthma attack, the lining of the airways tightens and narrows, therefore reducing the amount of air passage.

Cells in the aviation routes may make more bodily fluid than typical. (Bodily fluid is a sticky, thick fluid that can further limit your aviation routes.)
This chain response can bring about asthma indications. Indications may incorporate wheezing (a shrieking sound when you inhale), midsection snugness, shortness of breath, and hacking.

It’s vital to treat side effects when you first notice them. This will help keep the manifestations from intensifying and bringing on an extreme asthma attack. Serious asthma attacks may require more attention, or they might result in a high risk of fatality.

Asthma is an obstructive lung disease that causes a narrowing of the airways. The blockage of airways causes patchiness in lung ventilation that intensifies with expiration. Additionally, asthma is a progressive disease that typically worsens overtime. There is no real cure, however, asthma can be managed and treated.

If the asthma cannot be reversed even after administration of a drug treatment it is known as severe asthma. Severe asthma has constant airflow limitation and localized atelectasis. Atelectasis occurs when there is a buildup of fluid and no air in a part of the lung. This causes a collapse in the lungs and leads to an imminent death. 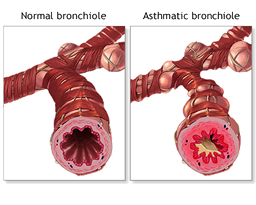 Symptoms vary day to day, time of day, seasonal, or during life stages. Though, they are commonly worse at night or early morning.

Why does this happen?

ACh contracts and relaxes the smooth muscles in the walls of the airway of a healthy individual. Individuals with asthma have hyperresponsiveness of ACh, which constantly contracts the smooth muscles. The physical stimulation can cause bronchoconstriction, bronchospasm, and coughing.

The thickened basement membrane is a hallmark for asthma causing an inflammation-induced chemical stimulation of the cells. The increase in goblet cell differentiation causes an accumulation of mucus secretion. The mucus produced is rubberier and more vicious than a healthy individual creating resistance. In a healthy individual, the cilia in the airway propels the mucus away from the alveoli in the lungs and towards the mouth. Cilia are hair-like organelles that extend from the cell body into the surrounding fluid. In asthma patients, cilia cannot sweep up the mucus due to the rubbery texture, which results in a blockage of the airway.

Diagnosis requires a clinical judgement of patient history, physical examinations of symptoms, and pulmonary function tests. Pulmonary function tests include spirometry and peak flow rates to measure the airflow limitation. Typically, individuals have an early onset of asthma, but can occur at any age.

Peak flow is how fast an individual can blow air out of their lungs.

Asthma exacerbation, also known as an asthma attack, occurs when the severity of the disease or symptoms acutely worsen.

After the use of bronchodilator drug inhalation, there should be a substantial reversibility of airway obstruction (≥12% increase in FEV1).

Typically, during allergy season, the immune system recognizes substances such as pollen as foreign material to the body. The body will release chemicals to try and kill the substance. In addition to inhaled corticosteroid treatments, there is an injectable medication called Xolair. Xolair medication lowers IgE levels, which may help during allergy season by preventing immune and asthmatic responses.

There are many triggers of an asthma attack. Some triggers are also allergy-causing substances and include things like mold, pollen, dust, and animal hair. There are many tests that can detect asthma are Arterial Blood Gas, Peak Flow Measurements, Pulmonary Function Tests and blood tests to measure eosinophil count.

Indications can happen every time the aviation routes are aggravated. Now and then indications are gentle and go away on their own particular or after negligible treatment with an asthma solution. Different times, indications proceed to deteriorate. At the point when indications get more serious and/or extra indications happen, this is an asthma attack.

What Do You Do During an Asthma Attack?

Common Symptoms of an Asthma Attack

Generally, during an asthma attack an individual should:

Prepare inhaler for use by shaking canister for several seconds. The person should exhale or empty all air out of lungs, and follow as listed below with or without a spacer: